The essential function of an addiction is to keep us out of touch with our feelings, morality, and awareness. There are several recognized addictive processes which develop certain ritualistic behaviours and thought patterns, including drug addiction and alcoholism, eating disorders, smoking, sexual addictions (including Internet pornography), compulsive spending, gambling, and workaholism.

Every addict engages in a relationship with an object (which may include a substance) or an event in order to produce a desired mood change.

Within the chemical dependency field, an addiction is broadly considered to be the compulsive need for any substance outside the person. An addiction to food and/or chemicals is often called a “substance” addiction.

A “process” addiction is an addiction to a way of living (which sometimes leads to acquiring an addictive substance). For example, the “dry drunk” is not using the ingestive agent, yet is acting as if she or he were. This is not only true for the alcoholic, but for the drug and food addict as well. Thus Alcoholics Anonymous’s (AA’s) Twelve Step program is one set of tools not only to move away from the substance abuse, but also to bring about a change from the addictive process.

It has been estimated that a high percentage of all helping professionals (including clergy) are not aware of the progression of addictions. Hence, in many ways, they may perpetuate and enable the addictive process. In addition many such professionals are themselves addicts. Workaholism is common.

In a high percentage of people who suffer from depression, there is a family history of some readily diagnosable chemical dependency. Thus many so-called dysfunctional family systems are in fact chemically dependent family systems. Therapists are aware that they must deal with such addictions or addictive patterns and inter-relationships in order for healing to take place in the family.

People normally get emotional and intimacy needs met through intimate connections with other people, themselves, their community, and with a spiritual power greater than themselves. According to Craig Nakken, an addictionologist, addiction is a “pathological love and trust relationship with an object or event.” (Craig Nakken. The Addictive Personality, pp.10-11.) Thus, whenever addicts act in addictive ways, their behaviour forces them to withdraw, to become internally preoccupied, and to isolate themselves from others. The longer an addictive process progresses, the less a person feels the ability to have meaningful relationships with others; this further perpetuates the experience of loneliness and isolation, which leads to further addictive behaviour.

In its beginning stages, the addiction process develops as an attempt to emotionally fulfill oneself; its long-term effect is to emotionally numb oneself and to eventually deaden the Self. As Nakken says: “Addicts trust they will experience a mood change if they perform certain behaviours….And although finding emotional fulfillment through an object or event is an illusion, it is an illusion that…helps to counteract the total sense of powerlessness and unmanageability the addict is feeling on a deeper, more personal level.” (Nakken, p. 14.)

Thus addicts confuse the intensity of acting out with intimacy. In feeling connected to the moment of intensity, the addict believes it is a moment of intimacy. In fact, it is a nurturance through avoidance. For the addict, different objects and events (eating, sex, gambling, drinking, chemicals, etc.) all have in common the ability to produce a positive and pleasurable mood change, which is fundamentally rooted in emotional isolation, not in true relational connection.

The process of addiction involves movement, development, and change. As an addiction develops, it becomes a way of life, a life-cycle, as shown in the diagram. 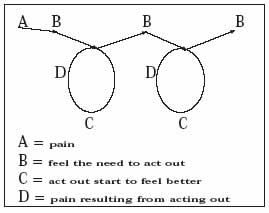 This cycle causes an emotional craving, resulting in a mental preoccupation, leading to a behavioural action, which leads back to the emotional hunger. Thus for an addict, the feeling of discomfort becomes a signal to act out, not a signal to connect with others, oneself, or with God. The more a person seeks relief from an inner emptiness and pain through addiction, the more shame they experience. Hence she or he becomes shame-bound and loses self-respect, self-confidence, self-discipline, and self-love.

As individual and relationship therapists, we see families where addiction has taken a devastating toll, where wounds which have often been too frightening to face, cause many hidden addictions that enslave and keep people from growth and freedom. Hope lies in becoming aware, dealing with grief, learning self-care, and deepening a spiritual core.

The Twelve Steps
(adapted for anyone involved in an addictive family)

STEP ONE We admitted we were powerless over the effects of addiction, that our lives had become unmanageable.

STEP TWO Came to believe that a Power greater than ourselves could restore us to wholeness.

STEP THREE Made a decision to turn our will and our lives over to the care of God as we understood God.

STEP FOUR Made a searching and fearless moral inventory of ourselves.

STEP FIVE Admitted to God, ourselves, and another human being the exact nature of our wrongs.

STEP SIX Were entirely ready to work in partnership with God to remove our ineffective behaviour.

STEP EIGHT Made a list of all persons we had harmed, willing to make amends to them all.

STEP NINE Made direct amends to such people wherever possible, except when to do so would cause injury.

STEP TEN Continued to take personal inventory; when we were wrong, promptly admitted it.

STEP ELEVEN Sought through prayer and meditation to improve our conscious contact with God as we understood God, praying only for knowledge of God’s will for us and for the power to carry that out.

STEP TWELVE Having had a spiritual awakening as the result of these steps, we tried to carry this message to others and to practice these principles in all our affairs.

Our Associates serve the greater Toronto community with offices throughout the city.